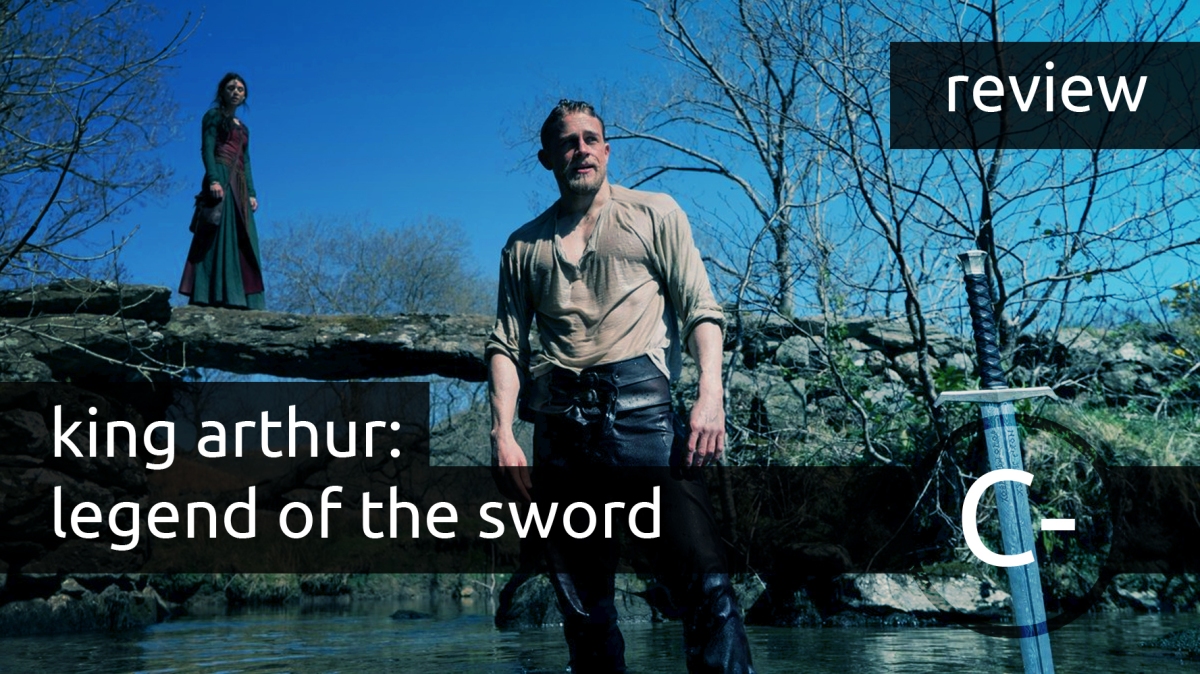 It is difficult to write a review of a film such as King Arthur, as I am going off of only my vague recall of what I remembered happening and my notes made immediately after the screening. The morning after seeing this movie I found that I had pretty much forgotten what happened in it. It was just that middle of the road and average that moments dissolved from my mind like the lady of the lake’s tissues.

The film of King Arthur is based on the old English legend, of the son of a slain king, prophecised to be the only one who can pull the sword from the stone, pulls the sword from the stone and goes about using the sword to overthrow the corrupt king who killed his father. Simplicity in its most recognisable form, a story we’ve all heard a thousand times.

Much like Universal’s upcoming monster cinematic universe, this film is a laughable attempt to start a franchise, yet marketing wise you would not be scoffed at for not knowing that this film was even released, there really is nothing to the film’s presence other than over saturated images of Charlie Hunnan with the clarity turned to 100. The trailer was a garbled mess of unconnected images and sound bites. Even when put into the context of the film at large the trailer shots do not have any real connection to anything that happens in the film. There are giant elephants because magic and a giant snake because magic and giant bats because… it never really explained the giant bats. The film is such a rush job that has been savagely cut up by editors that much goes unexplained and remains unsatisfactory. Characters mention the fabled name of Merlin time after time despite him not appearing in the film in a transparent attempt to build anticipation for the ‘never going to happen’ sequel.

“Oh, I wonder which one of the sidekicks is going to be Galahad” the film wants you to ask, “and who will be Lancelot? Oh I can’t wait for King Arthur: Knights of the Roundtable, coming 2019,” not realising that nobody cares because the absolute bare minimum of effort has been put into making fun or interesting characters.

Viewers are expected to care about Arthur avenging his father when his father has only been present for one scene in the movie and hasn’t done anything to earn our empathy. Instead of developing a meaningful relationship with his father we instead are shown the same death scene 10 or 11 times to reiterate the point that “yes, his dad is dead, you should care about it.” It’s lazy, patronising and downright insulting to viewers to have your entire protagonist’s motivation be so cut and dry and to portray it as if it is some sort of cinematic feat of excellence. It’s boring, cliche, repetitive and uninteresting, it doesn’t need to be constantly revisited to remind us of what we should be caring about.

Likewise, Jude Law’s evil King is forced to “pay the price” toward the end of the film, killing his own daughter in order to gain more power. It is played off as an emotional moment, and it could have been moving if it wasn’t for the fact that until that moment I didn’t even know he had a daughter. The king also has some sort of elemental fire power, I think. I’m not too sure because he only used it once in the film to light a candle. Much like the giant snake that appears in the final battle there is no explanation for things that greatly impact the narrative.

In the action scenes the fight choreography is unabashedly stylistic but lacks any substance or weight. At times the film looks like a cut-scene from a Devil May Cry game. The film replaces good choreography with slow motion CGI close ups of moments of detail; an arrow lodging into a shoulder, a sword slicing through a sleeve. It’s a clear disguise to hide the shortcomings of the scenes themselves.

Guy Ritchie is an interesting director with a unique comic voice, his quick paced editing and snappy dialogue works well in comedies like Snatch and Lock Stock and Two Smoking Barrels When put into a semi serious context it takes on an uneasy quality. You can’t take it seriously because you know he doesn’t respect his own story, but you can’t laugh at it because there are no jokes in it. Watching Guy Ritchie’s latest two movies are like listening to Kevin Bacon use English slang in EE adverts, it just doesn’t sit right.

Much like when watching The Man from UNCLE, I could not wait for King Arthur to finish. It was long stretch after long stretch of boring set pieces, occupied entirely by dull characters whose dialogue was quick but unclear. There were some interestingly edited scenes of exposition but they were a mismatch with the tone of the film which seemed to want to be taken seriously yet was constantly making fun of itself.

Guy Ritchie seems to want to write cocksure, confident protagonists but King Arthur just comes across as a smug prick, despite constantly shirking his responsibility and acting as a passenger while external sources perform all the heroism for him. King Arthur is a film that most people could sit through, you may even laugh a few times, but you will not be excited by it, you will not be moved and you definitely will not remember it in a few months time.